The above image shows two types of mini split refrigeration line insulation. The black is relatively fragile and the white much stiffer. Pulling either through a conduit of any type would be difficult.

Using conduit of any type to provide a pathway for a refrigeration line is a little out of the ordinary. I can see why it may be a thought or a plan, but you best be cautious.

If your plan is to run a straight line of conduit from one end to the other and the conduit is large enough in diameter, then yes it could work. But, if you plan on any 90 degree angles or even 45’s then don’t plan on being able to pull it off. Even if you used a winch to pull it through you’ll never know if there are any kinks in the line.

Below is the gray electrical PVC and you can click on the image to check out Home Depots prices and availability. Both of these images are of the 4″ diameter elbows. You can see the longer radius in the gray. 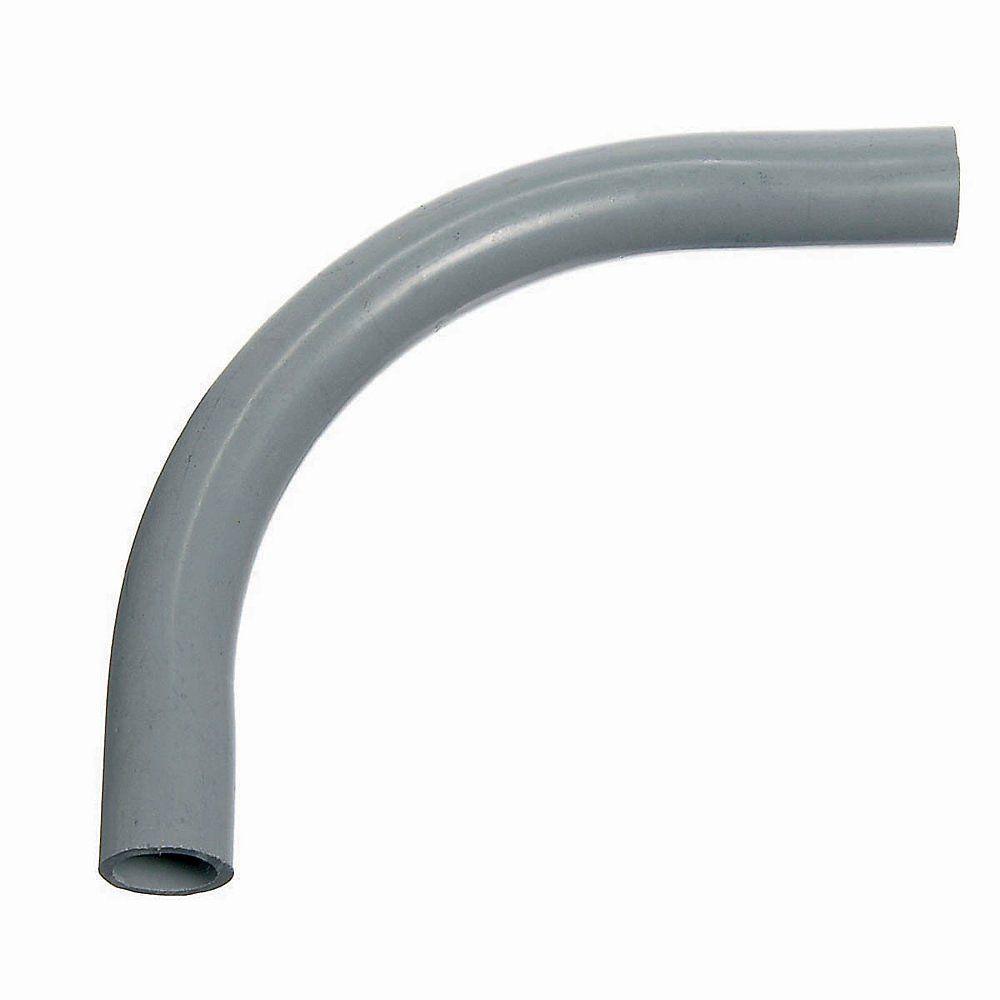 Copper tubing is very unforgiving when forced into a bend. Bending a mini split line set is not like bending copper wire. I used to work for a utility and we would pull wire through conduit and many times would have to lubricate the wire. You can bend wire without the fear of kinking.

The insulated line looks okay from this perspective in the above image. But look at the cutaway in the image below.

Unbeknownst to anybody this line is kinked. If installed it would go undetected. If the kink is a serious kink, to the point of a restriction, then you are going to have problems.

Problems such as compressor failures, which you never want, and diminished efficiency. You would think you got a lemon because the new compressor would also fail.

Or you would think you had a lousy technician that didn’t know you know what from shineola. But all along it was an installation problem.

If you could do all that, why would you need a conduit? Just run it in the joists.

What about the condensation? Is that drain line included or did you find another place to take care of the humidity collected by the coil pan?

Would Ductless Mini Split Line Set Covers Be An Alternative To Conduit?

Their are so many situations out there in the construction arena. Answering all the questions in one article is impossible. I can only offer suggestions.

I’ve seen lots of mini split installations. I was going to say many mini……. Oh well. It boils down to aesthetics. The line sets on the outside of a home are distracting to say the least.

There are a few choices in the type and appearance. You may have your favorite places to shop but if you just want to get a quick glance at what line set cover look like and what they cost you can check out both Amazon and Home Depot.

The thing that amazes me as I see these different installations is that virtually none of them are painted. A white cover over a dark colored house and the line set cover stands out like a sore thumb.

Funny, I just got back from the urgent care to get a sliver out of my thumb that I’d been digging at for a couple of days………………

Chad Peterson is near 40 year veteran of the HVAC industry. "I like to explain heating and air conditioning problems in a way the average home owner can understand. "

link to Do I Need A Base Pan Heater For My Mini Split?

I'll explain three simple ways to reset your homes HVAC system. But be ready, if these don't work you better be prepared to call a technician. Deep down in your gut you probable know something is...

Chad Peterson is a licensed HVAC contractor for the state of Oregon. "I like to explain heating and air conditioning problems in a way the average home owner can understand."

This site is a participant in the Amazon Services LLC Associates Program, an affiliate advertising program designed to provide a means for sites to earn advertising fees by advertising and linking to Amazon.com. We are compensated for referring traffic and business to Amazon and other companies linked to on this site.